Born in 1929 in the village of Jawra, Madhya Pradesh, Abdul Halim Jaffer Khan saheb received his training in Hindustani music from his father Ustad Jaffer Khan of the Bande ali gharana of indore. He has been performing on the concert stage from an early age.

From 1950's till almost 1970''s, he was an established part of the ruling trinity of sitar greats,along with Pandit Ravi Shankar and Ustad Vilayet Khan saheb.

Abdul Halim Jaffer Khan Saheb has also researched in Sitar technique. In 1976 he 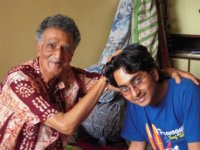 established the Halim Academy of Sitar in Bombay with a view to imparting systematic training to younger musicians. A broadcaster of long standing, he has a large number of landmark gramophone recordings to his credit. He has also composed music for films including Goonj Uthi Shehnai and Jhanak Jhanak Payal Baje. He received the Padamshree in 1970, the Sangeet Natak Akademi Award in 1987, the Gaurav Puraskar of the Government of Maharashtra in 1990, and the Shikhar Samman of the Government of Madhya Pradesh in 1991.

Pandit Harashankar Bhattacharya received lessons in Sitar first from his Father Late Ganga Shankar at the age of six, then at the age of ten from Late Murlidhar Thakur (Bishnupur Gharana) and finally from Padmabhushan Ustad Abdul Halim Jaffer Khan Saheb (IndoreGharana, Jaffer Khani Baaj) at Mumbai from 1968. He has been performing from an early age.

A grand son of Sitarist Late Lalmohan Bhattacharjee, he is the finest exponent of Jaffer Khani Baaj from India.  He has given performances all over the world. Harasankar Bhattacharya is an established music director of Lokoranjan sakha, West Bengal and was a former music director of Sree Ram Bharatio Kala Kendra, Delhi. He has established his excellence and Command in the field of Hindustani Classical Music (Instrumental).